As someone who loves food, I follow an ever-growing list of food blogs and industry experts. There is so much content on the web and social media channels, its overwhelming sometimes but most of the time it is just plain inspiring. They motivate me to push my boundaries and work with different ingredients that I may or may not have used in the past. I’m always astonished by recipes that need only a handful of ingredients, but when put together they create something incredible. This Ginger Scallion Noodles recipe is one that has been doing the rounds on the various social media channels for a while now. It was only time before I tried it out to see what the hype was all about. I first came across the recipe on Bon Appétit – a site that I’m addicted too for its beautifully curated recipes and imagery. I wasn’t disappointed with what was on my plate, these noodles definitely fall under the ‘better than takeaway’ noodles category and was a big hit.

I’ve of course adapted the recipe a little to put my mark on it. You can also make some changes as per your taste. The original recipe calls for hot oil to be added over the sliced ginger, garlic and spring onions. However, I like all these ingredients wok fried so that they aren’t too raw – especially the garlic. I didn’t cook the garlic and ginger until they were fully cooked, so that they still rendered their crunch, albeit not exactly raw (and smelly).

To my vegan friends reading, you’re going to love these ginger scallion noodles. You can adapt them further by adding in vegan mince or tofu sautéed with green chillies, ginger+garlic+spring onions and some soya sauce. Make it colourful and healthier by throwing in some wok fried greens – broccoli, and edamame beans. Throw in some toasted sesame seeds and voila, you have your very own ‘Buddha Bowl’. You see you can pretty much pimp this dish up. This dish is your canvas really.

I served these noodles on its own, but next time I’m going to pair with my paneer chilli recipe. I’ve made this dish a number of times, and its already turned into a family favourite, and more so my favourite because it is super easy, not needing too many complicated ingredients and is packed full of flavour. I hope you like it too. 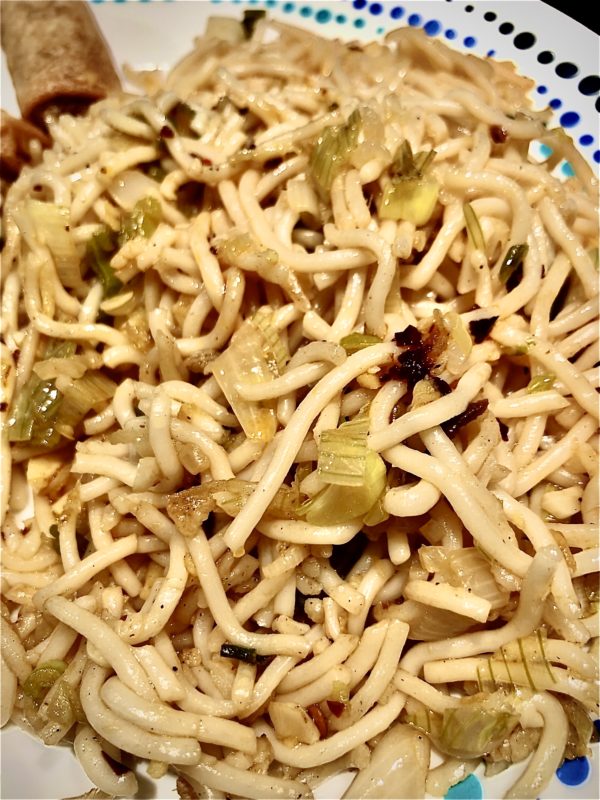