Last. night we played a game, which cuisine would you eat if you had ONLY ONE to choose for the rest of your life? Think very carefully before you respond. You probably can very easily guess what I went for? Indian of course! While I’m sure other cuisines also have their variety, in my mind Indian food has the most amount of flavour combinations, spices and preparations. So the next day, I went through my TO-DO list ( yes I have a what food to make next List). And thought I’d experiment a little. Not just improvise on an Indian Bengali dish but also combine that with Japanese food. This is my take on Begun Bhaja, a Bengali delicacy of Aubergine Fritters of sorts. I’ve combined it with a Katsu curry and have lovingly named it Aubergine Katsu Cutlets.

I’ve adapted the traditional Bengali Begun Bhaja recipe, and improvised based on the ingredients I had. Puritans look away now, or read through and see if you think it works for you.

What do I have?

In order to make the traditional Begun Bhaja, you need rice flour and surprisingly I only had a small amount left. That meant I had to think on my feet and figure out what best I could do with the ingredients I had in my store cupboard. Then it hit me, why not use breadcrumbs instead.

I quickly combined breadcrumbs with salt, pepper and some paprika powder. Now I had to find a way of binding this to the aubergine slices.

The next hurdle was figuring out what to use as a binding agent. Eggs were out of the equation as I am allergic. Yes, difficult specially when it comes to baking. Meringue you’re wondering? Well I’ve never tasted it but I definitely want to try and create an eggless Meringue using Aquafaba at some point.

Thats when I thought of using cornflour. The cornflour paste worked a treat and helped to crisp up the aubergine katsu cutlets beautifully.

Shallow fry these beauties and voila you have the crispiest most delicious katsu cutlets. Serve them along with the curry or serve them on their own as a starter. 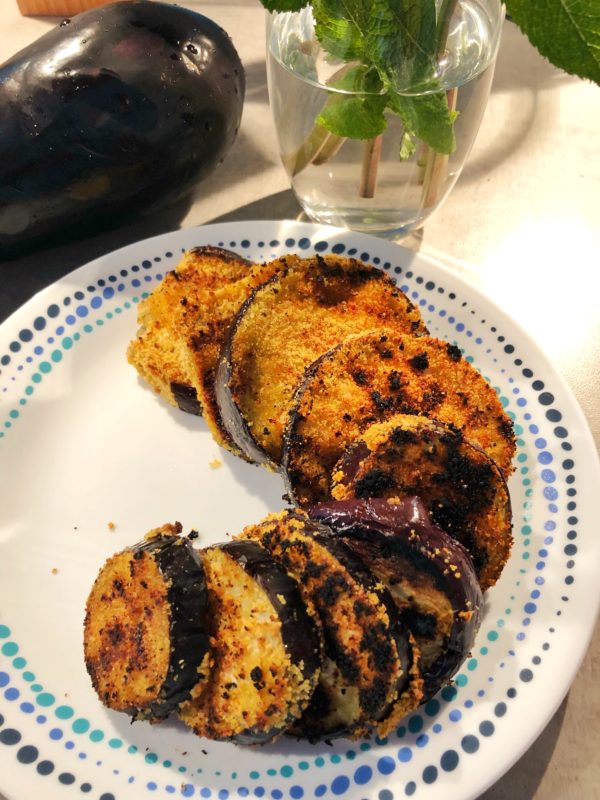